Getting In Touch With Nature

My next blog assignment for my Bio-36 Environmental Science class had me to get in touch with nature.  I had to go "outside" somewhere quiet whether its was going on a hiking trail, a park, or my very own yard for at least 20 minutes. I decided to choose my own yard because I do not usually get to spend much time outside and I know there is a lot to observe because my yard is almost an acre. Not to mention my parents love planting all kinds of of trees, especially fruit trees.
I decided to sit in an area between my front and my back yard. It was a Wednesday morning almost noon at 11:30am when I started my observation. It was a colder day than usual in Southern California at about 60°F. It was sunny but when the few clouds in the sky would cover the sun you could feel it the temperature drop. The air was cool and crisp and the soil where I sat was still a little soft and muddy because it was rained the night before. My observation lasted about 30 minutes and here is what I observed. 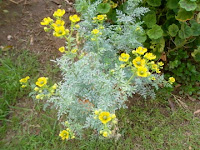 In the picture to the right, the closest tree is a Jacaranda mimosifolia tree, this one blooms blue flowers in the spring, sometime in May. The first bush you can in the top picture is called a red Geranium. I also took a close up of this plant and its flowers on the picture to the left. The picture below the red Geraniums is a Common Rue or Ruta graveolens, also known as "Herb-of-Graced". This common rue was located right
next to the left of the geraniums. I wasn't able to find the name of this plant until my mother told me in Spanish that is was called    "ruda". I was not able to identify the bush behind the common rue, with the waxy thick leaves and tiny pink flowers even though most looked brownish from being exposed to cold, harsh temperatures.  Behind this plants and shrubs, there is a row of 8 cypress pines that are approximately each 9 feet tall. To the left of that row of pines there is a walnut tree that is about 12 years old. I know these because my brother and I planted that tree when we first moved here in the summer of 2000.
During my observation I could hear various sounds of birds. One that I was able to recognize was a mockingbird's songs. I also heard other birds, and the occasional crow, and the neighbor's rooster's cries. I also heard the leaves brushing and whipping against each other every time there was a breeze. I was not able to notice any insects during the time I spent outside, I think it was because it had rained and it was cold out.
The tree to the right is a picture of one of my favorite fruit trees from my yard. It is a naval orange tree and if you look closely there are about three oranges left. So that ended my observation and I had a lot of fun spending some time in my yard, I found it very relaxing. I think I'm going to start doing it more often because after all we do live in California, where the weather is always nice.

Hello everyone, let me start off my introducing myself, my name is Jessica Barragan and I am a student at Riverside City College. The main purpose behind my blog is for my Biology-36 Environmental Science class, but first here is a brief biography about myself.
I was born in Monterey Park, California and I lived the first 10 years of my life in Pomona, California. Then I moved to Riverside, which is also where I currently reside. I started as a Biochemistry major, but I changed it to Food and Nutrition Sciences and I plan to attend Cal Poly Pomona (fingers crossed I'm still waiting to hear from them) next fall. I plan to work in the health care field as a Nutritionist or Registered Dietitian .
Aside from being a full time student, I work for an after-school program called THINK Together and I have a combo class of 24 first and second graders. They are a handful but I love working with kids. When I am not in class or working, I like to spend my free time at the gym but my new current interest is CrossFit. CrossFit training is a combination of weightlifting, sprints, gymnastics, power-lifting and rowing and it sounds intense but the workouts are designed to adjust to your current level of fitness and the objective is to get people working out together, while supporting one another, and making progress one day at a time.
What drew me to take this Environmental Science class is that I am interested in understanding and knowing more, on what goes on around me. Everything has a cause and an effect, so if one was able to better understand how their actions or the actions of others affect the world and the environment, one would think twice before committing such actions. A topic I would like to explore this semester is on food production,  and its effects on the environment and humans, whether its organically or genetically modified, I am very interested in this topic.